Here are the reviews for our Wigmore Hall performance of Cesti’s Orontea on December 14th: 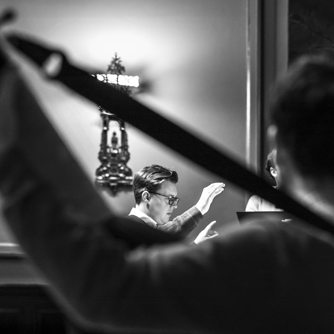 A few weeks ago at Shakespeare’s Globe, I felt I had been locked into some terminal limbo of tedium. Clever men describe Luigi Rossi’s Orfeo as a “masterpiece” of the Italian baroque, written during the 1640s, but it seemed to ignorant me nothing more than a stock romance with some irritating comic characters, clothed in insipid and monochrome music.

Everyone else loved it, however – so I thought, well, perhaps the idiom is just not my cup of musical tea. But here at the Wigmore Hall was another opera of the same school, composed contemporaneously within the same framework, which I found much more palatable……..

LNM joined forces with American Counter Tenor Bejun Mehta for a memorable concert at the Wigmore Hall on Monday. The Critics not only admired Bejun's assured singing but also praised…

Thank you to Anna Picard who gave our performance of Acis and Galatea a five star review in the Times on November 5, 2015! "Pathos, bathos and balmy breezes ebb…

Here is a link to David's personal website as a conductor and particularly his diary of appearances around the globe. La Nuova Musica are delighted to announce an exciting sensual collaboration with Sarah McCartney of 4160Tuesdays who will scent our performance of Acis and Galatea at St John’s Smith Square on 2 November 2015.

Sarah has created three scents: Galatea, Acis and Polyphemus and shared with us the inspiration behind her creations:

“A few years ago I read about the way early music was scented and wanted to give it a try, bearing in mind that people’s exposure to smell has changed completely over the last 150 years.

In Handel’s time scents abounded – from animals, lack of public hygiene, both personal and civic, and from expensive perfumes used by wealthy individuals and establishments, including the church.

An opera would have been intensely scented, both accidentally and on purpose.
Posies drowned out the stench of the street; dried flowers and incense created a suitable atmosphere, the wealthy powdered their hair and clothes with costly iris root, and kept deterred fleas and moths with patchouli. END_OF_DOCUMENT_TOKEN_TO_BE_REPLACED

We are proud to announce our first ever season brochure, covering the autumn/winter period. Some of the dates have already been available from our website, but you will also find additional details on casting, box office, past and future recording projects et al. END_OF_DOCUMENT_TOKEN_TO_BE_REPLACED

On the occasion of the start of its self-promoted SJSS concert series, on the 20th March LNM launched its new Friends Scheme. It offers a variety of options, from memberships… On Nov 30, we  team up with one of the most celebrated countertenors of today, Bejun Mehta, in an aria programme of works by Vivaldi, Scarlatti, Handel et al.On Dec 14, we will present Antonio Cesti’s 17th Century opera ‘Orontea‘, which we performed last summer at the Innsbrucker Festwochen. END_OF_DOCUMENT_TOKEN_TO_BE_REPLACED

LNM is very proud to return to the Spitalfields Festival this summer as Associated Artists, presenting Handel's 'Israel in Egypt' on June 4, Couperin's 'Leçons Des Ténèbres' (with Lucy Crowe…